The Story Behind Brian’s Song, The Biggest Sports Movie In TV History

As a halfback and kick returner at the University of Kansas and during his too-brief NFL career with Chicago Bears, Gale Sayers’s derring-do made for a highlight reel like football had never seen. Sayers, who died on Wednesday at the age of 77 from reported complications of dementia, wasn’t large enough (6-foot, 198 pounds) to run over everybody. But he figured out better than anybody who played before him that you can’t get tackled if you don’t get touched. Sayers was breaking ankles before anybody had a term to describe what his gravity-defying cutbacks did to defenders. He famously boasted that he needed his blockers to give him just “18 inches of daylight” and he’d do the rest, and the relatively little game footage he left behind before he got his right knee blown out in 1968 shows he spoke the truth. Sayers played in just 68 games over seven seasons, yet got voted into the Hall of Fame during his first year of eligibility in 1977, when he was just 34 years old, still the youngest player ever inducted. Only three inductees from the NFL’s earliest days, Ernie Nevers, Cliff Battle, and Doak Walker, played in fewer games. Sayers still holds the career record for kickoff return average, with a remarkable 30.5 yards per.

Yet Sayers’s passing provides a good reason to look back at the most lasting video artifact of his amazing life, one that he didn’t even have a formal role in. That would be 1971’s Brian’s Song, a low-budget, made-for-TV biopic about his relationship with dying Bears teammate Brian Piccolo. Future Star Wars star and malt liquor shill Billy Dee Williams played Sayers.

For all its shoddy production values and ridiculously hurried production schedule, the film would become one of the most beloved and popular sports movies of all time.

Even President Richard Nixon, after a private screening at the White House about six months before the Watergate break-in that did him in, weighed in. “Believe me, it was one of the great motion pictures I have seen,” Nixon said. “I think it was a beautiful production, and one that every American ought to see.” The film garnered 11 Emmy nominations and a Peabody Award and rave reviews all over. The movie’s theme song, written by Alan and Marilyn Bergman (who also wrote the Oscar-winning theme for The Way We Were) got the Grammy for best instrumental.

Because it was such a smash,  Brian’s Song’s producer, Screen Gems, released the movie to theaters in April 1972, mere months after its debut broadcast. This was at a time when the line between TV and feature films was far wider than it is today. Newspaper accounts of Brian’s Song's theatrical release said the last time the little-screen-to-big-screen gambit worked was in 1955, when Disney put Davy Crockett, King of the Wild Frontier in moviehouses after repeated network TV airings. 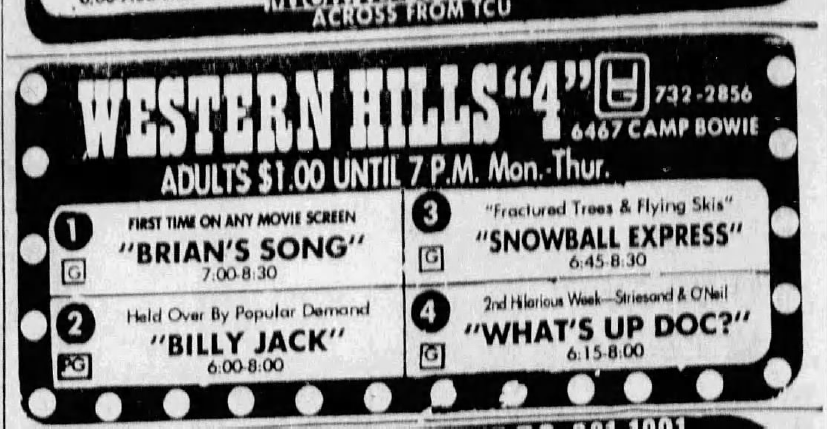 The ridiculously short cradle-to-grave timeline of Brian’s Song is among its many arcane attributes. Piccolo died of cancer at 26 years old in June 1970, then within months of the death Sayers hurried out his memoir, I Am Third, which went deep into his relationship with Piccolo, and within a year ABC had produced and aired its movie based on the book. Those casting the movie had an eye for real stars or amazing luck. The lead roles in Brian’s Song went to a couple of essentially unknown actors who’d go on to cinematic greatness. The role of Piccolo went to James Caan, whose turn as hothead mobster Sonny Corleone in The Godfather would hit theaters just four months after Brian’s Song premiered on TV. Legend holds that Sayers’s role was initially given to Lou Gossett Jr., but was recast with Williams after Gossett Jr. ruptured his Achilles tendon in a pre-production workout. Several Bears players, including Hall of Fame linebacker/Lite Beer peddler Dick Butkus, played themselves.

The movie was notable at the time for some scenes that, for good reasons, now seem arcane. Among them: a man saying he loves another man, and a black guy living with a white guy. “It makes race relations look so simple and uncomplicated and so right that you wonder what the fuss is about," wrote Los Angeles Times TV critic Don Page in a gushing review that ran the same day the movie premiered. There was some backlash to the post-mortem deification of Piccolo simply for being pals with a non-white teammate: The Baltimore Sun’s Judy Backrack railed that the film "was ostensibly about the death of a football player, but was more precisely about how gracious and charitable that footballer was during his lifetime for deigning to share a room with a black man." (Sayers and Piccolo weren’t actually the NFL’s first interracial roommates: Jerry Smith and Brig Owens of the Washington Football Team, a team with an overwhelmingly heinous history in racial matters, were paired up in 1965, a year before Sayers and Piccolo hooked up. But because of the movie, the Bears’ duo usually gets credited as the inaugural white/black bunk bed buddies.)

The movie’s racial content has not all aged well. One scene has the Piccolo character repeatedly calling Sayers the n-word in a weight room, ostensibly to motivate him to throw more steel. The Sayers character goes into a laughing fit, and the buddies’ bond never seems tighter.

The Brian's Song script was written by William Blinn, who was later credited as the screenwriter on Prince’s Purple Rain. Blinn obviously intended the slur scene to provide comic relief. This was an era of television where racism-for-giggles was big in pop culture, with Don Rickles in heavy rotation on the Tonight Show, and Archie Bunker on All In The Family. The latter show’s debut in January 1971 was preceded by a warning from the CBS network: “The program you are about to see is All In The Family. It seeks to throw a humorous spotlight on our frailties, prejudices, and concerns. By making them a source of laughter, we hope to show—in a mature fashion—just how absurd they are.” Early episodes also had an audio disclaimer introducing the program as being intended for a “mature audience.”

All in the Family went on to be America’s top rated show every year from 1971 to 1976 and got 40 million viewers. ABC, which had turned down the race-based sitcom smash before it was picked up by CBS, aired no warnings or disclaimers before Brian’s Song. And the film was rated G, meaning fit for all audiences, when it hit theaters. It wouldn't get that rating in 2020.

The Bengals’ Season Came Down To One Late Hit

The Philadelphia Eagles Will Absolutely End You

John Angelos Is Not On Your Timetable