On Oct. 30, 2018, the Big 12 Conference announced the conclusion of its sanctions against Baylor University. Eight months earlier, the conference had imposed a multi-million dollar penalty on the school, in response to the administration’s persistent failure to protect its students from sexual assault. In order to “verify that proper institutional controls are in place and sustainable,” the Big 12 decided to withhold a portion of Baylor’s future revenue, estimated to be over $14 million, until a third party verified that the university had made the necessary changes to keep their students safe.

But by October, a mere half a year later, the Big 12 was ready to forgive and forget. The conference’s verification report stated, “Baylor has in all material respects structurally completed the (105 Pepper Hamilton) Recommendations,” referencing a list of 105 recommendations made to the school by a firm that was hired to investigate Baylor’s failures with preventing and thoroughly investigating sexual assault. This seemed like a conclusion, and was reported as one. The book on Baylor football’s sexual assault scandals was closed.

Except, of course, it wasn’t.

Annie Andrews (a pseudonym assigned by the court for her protection) reported her sexual assault by three Baylor football players to university police soon after it happened in November 2017. The three football players she said sexually assaulted her were suspended from the team immediately, but the public didn’t learn about the suspensions until ESPN reported it in March. When a grand jury declined to indict the two players in June 2018 because of insufficient evidence, the assault fell out of the public eye. But the Title IX investigation on campus remained. More than a year after Pepper Hamilton issued all those “recommendations,” Baylor took its time with Andrews’s case.

Eleven months after Andrews reported her assault and one day after the Big 12 lifted sanctions on Baylor, the Title IX investigation concluded that Baylor football players John Arthur and Tre’von Lewis had raped Andrews, and that their teammate Justin Harris had sexually exploited her. The full Title IX investigation is under seal, but an amended petition filed by Andrews’s lawyers says that Baylor “concluded that Arthur and Lewis had raped Annie.” By the time that conclusion was reached, 11 months after Andrews had reported that she had been sexually assaulted, court documents detail, all three players and Andrews had left the university.

It’s impossible to understand this case without knowing what happened at Baylor six years ago. In October 2013, a young woman reported to Waco police that she had been sexually assaulted by incoming football player Sam Ukwuachu, who transferred to Baylor after being dismissed from Boise State. But the story was kept quiet. Not until August 2015, when the case went to trial, did reporters like our own Diana Moskovitz and Texas Monthly’s Dan Solomon and Jessica Luther note the university’s suspicious silence on the case. It became apparent that Ukwuachu had missed the 2014 season because of his indictment for sexual assault. Through diligent reporting, it became clear that not only was there a rampant sexual assault problem at Baylor, but university officials had failed to take the problem seriously. University president Ken Starr, athletic director Ian McCaw, and head football coach Art Briles were ousted. Ukwuachu was found guilty of sexual assault and sentenced to 180 days in jail (that ruling was upheld by a court in 2020, and a motion to rehear the case another time has been denied), while more damning details came out about what Baylor had known in the case of former football player Tevin Elliott, who was convicted of sexual assault and sentenced to 20 years in prison in early 2014.

Baylor never published the full report from the law firm they hired to make recommendations. In their comprehensive story for Deadspin about the Baylor scandal, Solomon and Luther wrote, “Baylor’s leadership—even after Briles was fired and the university had ostensibly moved on from the sexual violence crisis that had unfolded under his leadership—sought to keep things as quiet as they could.” The full extent of the Baylor football team’s sexual assault scandal is unknown, but Baylor admitted in late 2016 that at least 17 students reported being raped by 19 football players. There remain many ongoing lawsuits brought by former Baylor students, but none of them are quite like this one. Andrews is suing Baylor University, but not for any Title IX violations.

Instead of focusing on a failed Title IX investigation, Andrews’s lawsuit asserts that Baylor knew her university-assigned dorm was dangerous, and they withheld that information. The focus of her case, which is being tried in Harris County, is negligence. Their claim is that Baylor knew how dangerous of a place Andrews’s residence at Baylor University was, and actively tried to convince her that it wasn’t.

Andrews’s case is going to trial, with opening statements starting today. In the leadup to the trial, Baylor filed several motions that attempted to exclude the Title IX investigation they did on Andrews’s case from her trial, as well as all prior instances of sexual assault at Baylor. On Tuesday, the judge denied those motions.

There is still a lot of information to be revealed in this case. Many pieces of evidence (including Baylor’s Title IX case for Andrews and depositions with members of the university police department) are under seal and will not be revealed until the trial is underway.

Andrews was a world-class equestrian in the Spring of 2017. She was a junior in high school when Baylor fired its president, athletics director, and head football coach to show they were serious about the allegations of sexual violence. She was recruited to attend Baylor on a scholarship as an athlete. Baylor has a rule that all freshman students live in on-campus housing unless they meet one of four requirements: 1) can live with their parents in Waco, 2) are already 21 years old, 3) are married, or 4) have dependents. Because Andrews did not meet any of those requirements, she was assigned an on-campus dorm at University Parks.

University Parks is not a normal residence hall. It’s far from all the other residence halls, and it used to be a regular apartment building. Baylor purchased the apartments at University Park 2012, officially making it on-campus housing. Here’s what Baylor’s director of campus living and learning, Tiffany Lowe, told the Baylor Lariat in 2012:

University Parks is a 30-minute walk from the other freshman student dorms and houses over 500 students. Unlike a dorm with shared bathrooms and shared spaces, University Parks is a regular apartment building. Andrews was assigned to this on-campus living because, according to the court documents, that’s where Baylor houses many scholarship athletes, including many football players. The court documents say that Baylor pitched University Parks as a perk for athletes because it was less strict than the traditional freshman dorms and gave students more freedom.

Andrews’s suit says that the layout of University Parks, where all the apartments have outside entrances, made the residence much harder for resident assistants (at Baylor they are called community leaders, or CLs) to monitor the environment, which theoretically was supposed to be free of alcohol and drugs and without parties.

According to the court documents, on Nov. 12, 2017 during a late-night party at University Parks, Andrews was sexually assaulted by two Baylor football players. The documents outline her assault in detail here:

She reported her assault to her coach, Baylor’s Title IX office, and Baylor police. The suit says that the university police department “deliberately sandbagged” its investigation. These quotes come from depositions and evidence that are currently under seal and are expected to be revealed over the course of the trial. 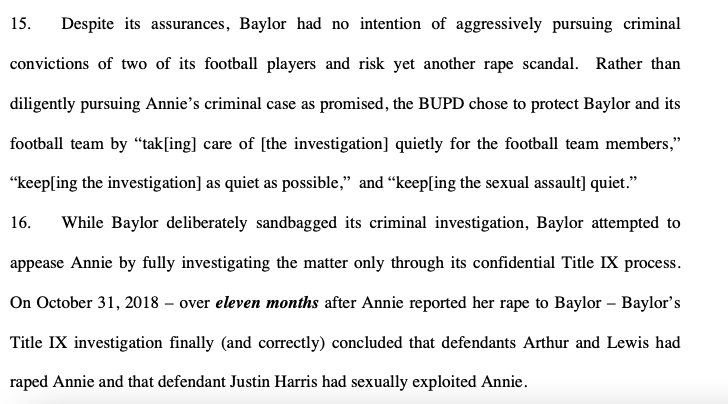 What Andrews’s lawyers are arguing is that Baylor knew that University Parks was a dangerous place for women on campus, even after completing Pepper Hamilton’s 105 recommendations. According to Baylor’s own Annual Fire Safety and Security Reports in 2015, 21 of 23 reported rapes were reported “on campus residential only.” In 2016, there were 11 rapes, 10 reported on campus. In 2017, 12 rapes, eight reported on campus. That means the majority of reported rapes at Baylor are happening in on-campus residences.

Andrews’s lawyers argue that not only was this information not easily available to her, the university directly misled her. The plaintiff’s fourth amended petition and jury demand states, “Baylor’s staff repeatedly and unequivocally assured Annie and her parents that Baylor’s residence halls were safe and that Baylor had resolved its problems with respect to its football team.“

Baylor University’s filings show that they are trying to exclude as much as possible from this case. They have filed motions to exclude Baylor’s history of prior sexual assaults, the Title IX report, the outcomes of Andrews’s case (which is still restricted from public viewing), data on sexual assault at University Parks, and to keep an expert witness from testifying. The university’s lawyers also submitted a motion to exclude data gathered under the Clery Act—a federal law that requires all universities who receive federal funding to publicly report crime statistics. They also asked to exclude “documents exchanged with the Department of Education relating to their review of Baylor’s compliance with Clery reporting requirements,” communications discussing Clery Act compliance, and daily crime logs. Judge Lauren Reeder considered these requests and denied them. All of that evidence will be considered during the trial.

“I would also acknowledge that mistakes have been made that were not addressed appropriately, particularly with regard to sexual violence on campus. The lessons learned from those mistakes, and the many changes made to ensure a safer and healthier campus for all of our students, have resulted in Baylor being a better place now than we were two, three and certainly five years ago,” Baylor president Linda Livingston told the Texas Tribune in 2017.

Andrew’s representation, when asked for comment, said that they “have faith in the jury system to decide this vitally important matter.” Baylor University spokesperson Lori Fogleman, when reached for comment, said, “It’s important to note that this is not a Title IX case, but one involving premises liability law in Texas. Baylor University is prepared to vigorously defend the significant safety measures in place on our campus at the time of the incident in November 2017, to include not only physical infrastructure enhancements, but also training, education and the implementation of more than 100 specific measures directed at preventing and responding to incidents of interpersonal violence. We take the safety and security of our 19,000 students seriously and look forward to sharing our unprecedented efforts with the court.”

In the coming weeks, a civil jury will decide if Baylor is liable or not for what happened to Andrews. That is, in the immediate, what matters. But zoom out and it’s impossible to ignore the familiar contours of it all: a sexual assault investigation, a university sued, Baylor leadership once again waving their hands and saying Nothing to see here. For all the public relations hoopla Baylor has done to convince people it has changed, perhaps Baylor can also serve as a reminder: No institution ever wants to fix itself. It is the people and their actions, their protests, their lawsuits, who force them to be better.

Correction (5:49 p.m. ET): Though Ukwauchu’s case was retried several times, he has been found guilty of sexual assault according to a 2020 court ruling.

Keep up with our blogs.

Something you think we should know? Send a story tip to tips@defector.com

Defector Reads A Book Has Made Its Winter Pick

The Columbus Clippers Made Public Sports Ownership Work. Can Anyone Else?

Once Again, Give The Gift Of Blogs (And A Beanie) This Holiday Season

Sports blogs without access, without favor, without discretion, and without interference… but WITH a free beanie. Buy your friends and family a one-year gift subscription to Defector and you’ll not only get great blogs, but also a fashionable beanie to match. (We have so many leftover beanies from last year. Please take a beanie.)
Send a Gift Today

Before He Was At USC, Caleb Williams Was A Can’t-Miss Kid